A 23-year-old Pennsylvania man allegedly flew into a jealous rage and beat his girlfriend to death after she received a text message from her ex, and then hailed Uber to take her motionless body to a hospital.

Nicholas Forman got angry after his 22-year-old girlfriend Sabrina Harooni received a text message from an ex-boyfriend, and beat her to death according to police investigators.

Forman hailed an Uber and took Harooni’s motionless body to Pottstown Memorial Hospital on Monday, according to police.

At the hospital, Forman told medical staff that Harooni, his girlfriend of seven months, was attacked the night before by a group of women.

Doctors who examined Harooni found that she had been badly assaulted, having suffered severe head trauma.

Hospital staff told police that Harooni’s body was ‘ice cold’ when it was dropped off by Forman.

She had suffered bruises to her neck and dried blood in the nose.

When a nurse tried to perform CPR on Harooni, she could feel fluid in her lungs.

Another nurse climbed on top of Harooni’s body to continue CPR after she was moved to a stretcher.

Forman also gave the same version of events to police, he claimed three women had attacked his girlfriend the previous night but that she had gone to bed okay.

According to the arrest affidavit, Harooni was beaten so badly that her pupils were ‘blown out’ – which medical experts say is a sign of head trauma or a lack of oxygen.

Forman told police they went to a bar to watch the Super Bowl in Pennsylvania and that Harooni had gotten into an argument with three women.

According to him, the argument got so messy that she gave them his address in case they wanted to fight her later. He claims he didn’t get involved because he was on probation, having pled guilty to driving under the influence and resisting police arrest in 2017.

But when the police carried out their investigations, the Uber driver who took them home that night said Harooni joked about receiving a text from an ex, which made Forman get angry and demand to see her phone. According to the Uber driver, Harooni was so scared of Forman’s anger and remarks about checking her phone.

When the driver dropped them off he said Forman was still demanding “give me the f–king phone”; He waited around the block and the shouting died down about 5-10 minutes later. He said he heard him shouting he would not let her in until she showed him the phone.

Police say they were shocked when they searched Forman’s phone and they found a video showing Harooni lying motionless on the lawn, while a male voice shouts: “This is what a cheating liar gets. You hear me? Cheating f–king liar.”

When they searched his house, they found a clump of hair similar to Harooni’s in the front driveway. and found blood on the carpet and bedclothing.

On Thursday, Forman was arrested and charged with first and third-degree murder and a video posted on Twitter shows him being led from his home in handcuffs, calmly proclaiming his innocence.

Nicholas Forman told detectives 3 girls came to his Perkiomen home to fight his girlfriend & he didn’t get involved due to his probation. He stuck to that story as he was escorted in cuffs today. But evidence on his phone proves he is lying, police say @NBCPhiladelphia at 11pm 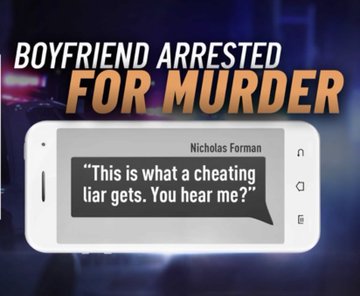 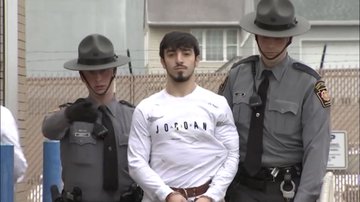