Anticipated movies Cats and Star Wars: The Rise of Skywalker have received their world premieres and early reactions have been delivered.

The final film in the epic Star Wars trilogy had its debut screening in Hollywood, while the Cats premiere took place in New York.

One Twitter user described Cats, which stars Idris Elba and Rebel Wilson, as “bewildering… and magical”.

Star Wars fans hailed The Rise of Skywalker as “a terrific finale”.

Plot details for Star Wars have been kept tightly under wraps but director JJ Abrams has said the trio’s characters – Rey, Finn and Poe – will be reunited on-screen, after dividing in 2017’s The Last Jedi.

Heading the line-up at the Star Wars premiere were the film’s young stars Daisy Ridley, who plays Rey, John Boyega, who is Finn, and Oscar Isaac, who plays Poe.

Star Wars veterans Mark Hamill, who plays Luke Skywalker, and Harrison Ford, who plays Han Solo, were also there to bid farewell to the movies that launched their careers in a venue made up as a futuristic hangar filled with life-size X-wing starfighters.

Anthony Daniels, who has played C-3PO in each of the main Star Wars movies, said the event felt “quite bewildering”.

“In fact, it’s such a big experience that I’m not sure I can quite cope with it. But I do feel proud to be here and proud to be part of it.”

The Rise of Skywalker officially concludes the so-called “Skywalker saga” of films begun by George Lucas in 1977.

The film is set one year after its predecessor and, at 141 minutes, will be slightly shorter.

Formal press reviews have been embargoed until Wednesday but social media reaction from those inside the three Hollywood theatres used to hold Monday night’s event was broadly positive.

“Epic. All of it,” tweeted Erik Davis, managing editor of the Fandango movie website, calling the finale a “wonderful way to end the Skywalker story”.

Epic. All of it. #TheRiseofSkywalker is a terrific finale that is just stuffed with so much of everything. Action, adventure — answers!! — humor, heart, love, and grit. I spent the entire second half with tears in my eyes – a wonderful way to end the Skywalker story 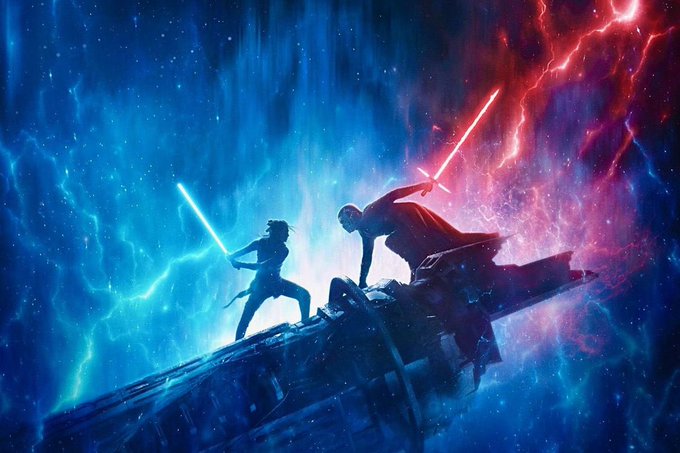 1,911 people are talking about this
Report

155 people are talking about this
Report

Variety’s Adam B Vary tweeted: “There’s so much movie in this movie.”

I’m gonna need a minute to digest #StarWarsTheRiseofSkywalker. There’s so much movie in this movie. But its best moments are the quietest and most human. Giving this more of a think, though.

229 people are talking about this
Report

“The emotional highs are spectacular, and there are a lot of payoffs (some earned, some not). But some choices feel like an unnecessary course-correct from The Last Jedi and some just plain don’t make sense,” said Laura Prudom of IGN.

Meanwhile sci-fi writer Jenna Busch declared she was “blown away”.

#StarWars #TheRiseOfSkywalker…OH MY GOD! I am absolutely blown away! I’ve never been so satisfied by a film. This is the end of an era and a franchise that has defined my life and this did it justice in a way I didn’t imagine it could. You WILL cry…. 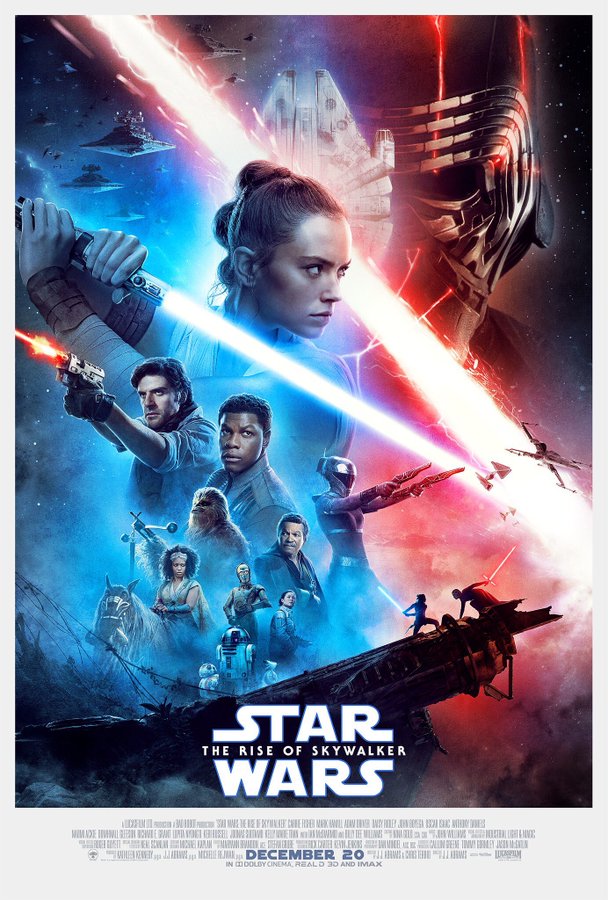 1,739 people are talking about this
Report

The movie is a big-screen version of Andrew Lloyd-Webber’s hit stage musical. Formal reviews are embargoed until 19 December.

Elba – who plays the cat Macavity – was more than happy to give Variety some top tips on acting feline, which apparently includes a lot of “nuzzling” and “smelling”.

What did Idris Elba learn at cat school? “You walk in and get on your knees. For at least seven minutes you prowl around, nuzzling each other, smelling each other, rolling around” #CATS 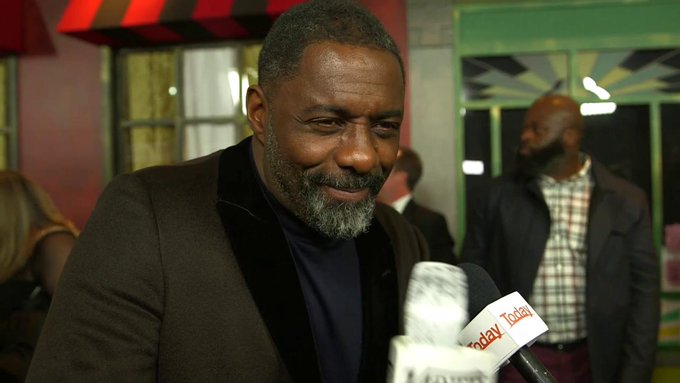 150 people are talking about this
Report

Despite the all-star cast, which includes Dame Judi Dench, reaction to the trailer when it was released earlier this year didn’t bode well for the finished film.

But the movie seemed to endear many early viewers, as the first reactions started to roll in on social media.

The CATS movie is the strangest, most bewildering, queerest, magical, and spectacular cinematic experience I have ever had. I am not sure what just happened but I know that it was something worth experiencing. 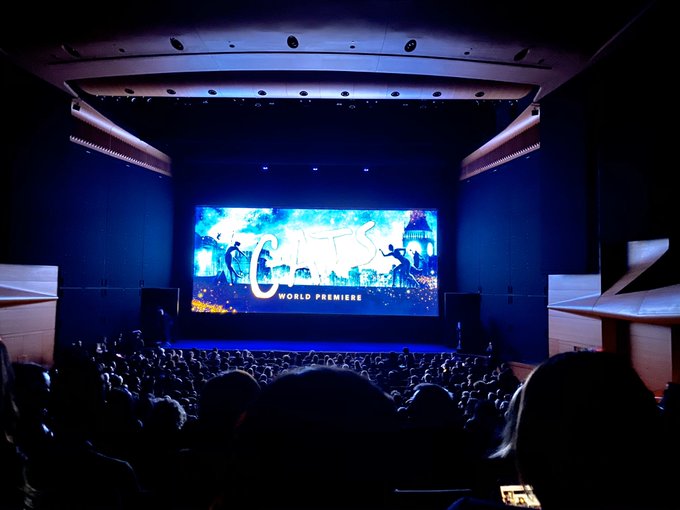 645 people are talking about this
Report

Variety’s Caroline Framke was equally effusive, even if in a rather different way.

1,046 people are talking about this
Report

Uh, #Cats is kinda great? Everything that seemed weird in the trailers just melts away when you’re watching the film. It’s magical and just plain works with the sole exception of Taylor Swift’s original song about the cats devouring the corpse of an old woman who died in her flat

373 people are talking about this
Report

However Rebecca Rubin, also of Variety, feared for her future slumber after seeing the movie.

65 people are talking about this
Report

Cats is released in the UK and US on 20 December and fans of the stage version will be eagerly waiting for cinema doors to open, no doubt buoyed by Monday night’s intriguing reaction.

The story, which was originally based on TS Eliot’s Old Possum’s Book of Practical Cats from 1939, is about deciding which of the cats will ascend to the Heaviside Layer – aka cat heaven.

The director said earlier this year that the story had a deeper message too that makes it relevant to human life in 2019.

“At the centre of this incredibly entertaining, comedic, fantastical musical is a very timely story about the importance for inclusion and redemption,” said Tom Hooper, who also adapted another classic musical, Les Miserables, for the big screen in 2012.

As for Star Wars: The Rise of Skywalker – released on 19 December both here and across the pond – Disney boss Bob Iger told AFP at the premiere that fans would get “some kind of closure, some sense of satisfaction” for their favourite characters.

“Star Wars is probably the most important, most valuable mythology of our time, of the modern time,” he said.

“If you just consider the global base of fans that have worshipped this storytelling since 1977, over 40 years… tonight being a culmination of nine films is an incredibly important night.”

Tim Richards, CEO of Vue International cinemas in the UK, told BBC News he was expecting “one of the biggest weeks in years for cinema admissions”.

“Most of our screens in the UK and Ireland will be playing late night sessions between Wednesday 18th and Thursday 19th, starting at 00:01, with a few cinemas like Manchester Printworks and Westfield London staying open all night for subsequent screenings into Thursday morning,” he said regarding Star Wars.

And for Cats, Richards was also anticipating a good turnout: “Tom Hooper’s amazing Cats has had huge pre-sales and looks like it will also be a huge hit, replicating its success on stage.

“Overall it looks like it’s going to be another record-breaking year for big screen entertainment.”